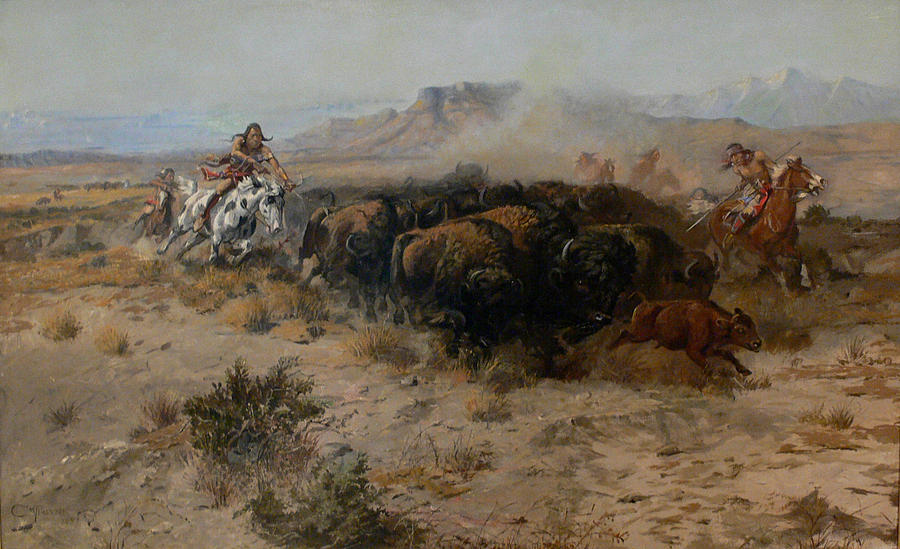 Charles Marion Russell (March 19, 1864 – October 24, 1926), also known as C. M. Russell, Charlie Russell, and "Kid" Russell, was an artist of the Old American West. Russell created more than 2,000 paintings of cowboys, Indians, and landscapes set in the Western United States and in Alberta, Canada, in addition to bronze sculptures. Known as 'the cowboy artist',[3] Russell was also a storyteller and author. The C. M. Russell Museum Complex located in Great Falls, Montana houses more than 2,000 Russell artworks, personal objects, and artifacts.
Russell's mural titled Lewis and Clark Meeting the Flathead Indians hangs in the state capitol building in Helena, Montana. Russell's 1918 painting Piegans sold for $5.6 million dollars at a 2005 auction.
Russell came to Montana in 1880 at the age of 16. After an unsuccessful stint working on a sheep ranch, he found work with a hunter and trapper turned rancher named Jake Hoover, who owned a ranch in the Judith Basin, and from whom Russell learned much about the ways of the west. The two men remained lifelong friends.[6] After a brief visit to his family in 1882, he returned to Montana, where he remained for the rest of his life. He worked as a cowboy for a number of outfits, and documented the harsh winter of 1886-1887 in a number of watercolors.[6] Russell was working on the O-H Ranch in the Judith Basin of Central Montana at the time, when the ranch foreman received a letter from the owner, asking how the cattle herd had weathered the winter. Instead of a letter, the ranch foreman sent a postcard-sized watercolor Russell had painted of gaunt steer being watched by wolves under a gray winter sky. The ranch owner showed the postcard to friends and business acquaintances and eventually displayed it in a shop window in Helena, Montana. After this, work began to come steadily to the artist. Russell's caption on the sketch, "Waiting for a Chinook", became the title of the drawing, and Russell later created a more detailed version which is one of his best-known works.

Beginning in 1888, Russell spent a period of time living with the Blood Indians, a branch of the Blackfeet nation. It is believed that much of his intimate knowledge of Native American culture came from this period. Upon returning to white culture in 1889, he found the Judith Basin to be filling up with settlers, so worked in various more open places for a couple of years before settling in the area of Great Falls, Montana in 1892 in an attempt to make a living as a full-time artist.
In 1896, Russell married his wife Nancy. He was 32 and she was 18. In 1897, they moved from the small community of Cascade, Montana to the bustling county seat of Great Falls, where Russell spent the majority of his life from that point on. There, Russell continued with his art, becoming a local celebrity and gaining the acclaim of critics worldwide. As Russell was not skilled in marketing his work, Nancy is generally given credit in making Russell an internationally known artist. She set up many shows for Russell throughout the United States and in London creating many followers of Russell.
In 1913, Russell painted Wild Horse Hunters, which depicts riders capturing wild horses, each band of which is dominated by a stallion. He used as much color as an artist could on his mountain landscapes. Russell the artist arrived on the cultural scene at a time when the "wild west" was being chronicled and sold back to the public in many forms, ranging from the dime novel to the wild west show and soon evolving into motion picture shorts and features of the silent era, the westerns that have become a movie staple. Russell was fond of these popular art forms, and made many friends among the well-off collectors of his works, including actors and film makers such as William S. Hart, Harry Carey, Will Rogers and Douglas Fairbanks. Russell also kept up with other artists of his ilk, including fellow Old West painter Edgar Samuel Paxson, painter Edward "Ed" Borein and Will Crawford the illustrator.
On the day of Russell's funeral in 1926, all the children in Great Falls were released from school to watch the funeral procession. Russell's coffin was displayed in a glass sided coach, pulled by four black horses.
A collection of short stories called Trails Plowed Under was published a year after his death. Also, in 1929, Russell's wife, Nancy, published a collection of his letters in which was titled Good Medicine.