The Story of G. Harvey and his Artwork

Previous Next View All 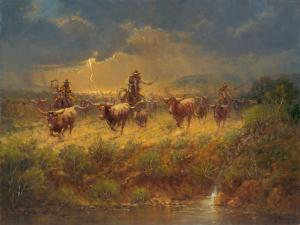 G.Harvey and his images have influenced a worldwide enthusiasm and demand for contemporary American art for a generation. Few artists have intrigued and captivated art collectors as widely as the celebrated painter, G. Harvey. During his storied career, G. Harvey has painted turn-of-the-century America as no other artist. His scenes are warm, thoughtful portraits of our country’s bustling cities in a more genteel era and outstanding Western sagas of working cowhands at home in rugged landscapes.

Gerald Harvey Jones, known to his patrons and peers as G. Harvey, grew up in the rugged hills in Central Texas where herds of longhorn cattle were driven along the dusty trails. This background has been the inspiration for the artist’s commitment to portraying the spirit of America. Through his art, our country’s history lives. Harvey restores all those memories, sights, sounds, and emotions. With his ability to capture the drama, light, and feeling of a moment, the artist brings the heart of his painting to the viewer.

G. Harvey is not only an extraordinary painter, but an accomplished sculptor. His original works and bronze sculptures are in the collections of major corporations, prestigious museums, American presidents, governors, foreign leaders, and captains of industry. The artist has been the recipient of innumerable awards and the subject of four books. Harvey has been honored with one-man shows at the Smithsonian Institution and the National Archives in Washington, D. C.

The artist’s original paintings are represented in major galleries. His annual, one-man shows are consistent sell-outs where Harvey collectors come from all around the country to view and compete to own an outstanding work by the artist.

G. Harvey lives in the beautiful Texas Hill Country with his wife, Pat, where they enjoy living near their children and grandchildren. A studio adjacent to his home is a sanctuary for creating the paintings that his legions of devoted collectors eagerly anticipate with each new work.
G. Harvey’s work reminds us that the world has changed very much and very little; country lanes and city streets are still romantic. It is, after all, from living in the present that the artist draws inspiration for the past.